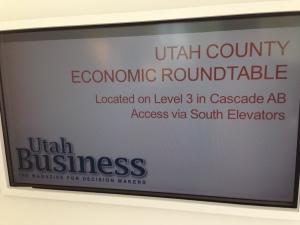 Utah and Utah Valley’s future is bright according to some top gurus of business at the UV Convention Center.

Yesterday, I delayed my morning gym workout to respond to the request to participate on an early morning Utah Valley Business Roundtable hosted by Utah Business Magazine (see their blog). It’s humbling to be asked again to offer my input on the future success of Utah, but especially so considering who sat around the table. To my left was Stan Lockhart who heads up IMFlash operations in Lehi. Rona Rahlf contributed as she prepares to exit rapidly rising Fishbowl to accept the post of UV Chamber President. Across from me was Mayor John Curtis of Provo City. Next to him was Brandon Fugel, Chairman for Utah’s Coldwell Banker Commercial unit. Google Fiber’s Utah lead, John Richards was there as was Central Bank’s CEO, Matt Packard. Jeremy Hafen, president for Sunroc Building Materials also came. Some 15 business and government leaders reported on Utah’s success and looked into the crystal ball to forecast the future of Utah Valley. 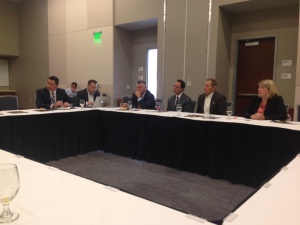 building, university growth, low unemployment, new patents, falling commercial building vacancy rates, and growing national rankings, Utah Valley is at the top of the top of the heap of economic stability and growth. Mayor Curtis brought in a raft of recognition the state and city of Provo now basks in:

Cool, huh!? Stan Lockhart of IMFlash spoke about the unique valley full-court-press to drive advancement in technology. He said, “Moore’s Law suggests that every 18 months we have to double the power of our flash memory chips at 1/2 the cost. Staying on that technology treadmill is critical to successfully compete in this industry. History shows that companies that don’t keep up go out of business.”

With a chronic shortage of high-tech workers for our hungry Silicon Slopes employment machine, both Lockhart and others spoke of focus on programs to grow the valley’s skilled worker base. Jeremy Hafen of Sunroc  Building Materials shared his company’s growing efforts to hire “character” and “grow skills” from within company ranks. John Richards pointed to BYU and UVU as sources of training needed to feed the insatiable appetite for skilled tech workers. Lockhart’s company, among others, takes a longer view 15-20 years down the road, supporting the states S.T.E.M. school programs that address learning at a very young age.

The group discussed the area’s current median age of 29 in Utah County. They agreed that area workers have a marketplace advantage in areas such as multi-lingual skills, sales experience, pioneer work ethic, and family stability.

While significant challenges yet exist in areas like air quality, skilled worker shortages, and poverty, the group sounded off unitedly with a positive view towards mutual collaboration to overcome any obstacle. In fact, the open dialogue between citizen and government, corporate and education is a definite advantage here over other states where there is far less collaboration and synergy.

UV Chamber VP Donna Milakovic wrapped up the discussion asking the group which awards “should” the valley be recognized for in the future. The group sounded off suggesting areas like active lifestyle, the arts, trails, museums, and multi-lingual advantages. Coming out of this meeting, I must admit I’m drinking the koolaid, hooked on Utah Valley, a believer in a bright future here in the postcard we call home.