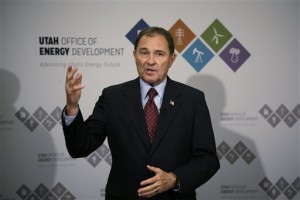 A new Gallup Poll indicates Utah residents dislike their air quality more than any other State.

This story just gets more and more interesting. I feel like Godzilla and Mothra just came onto the screen–both wearing air protection masks. First, EPA smacks down the opponent with new, harsh guidelines. Next, Governor Herbert says those guidelines will hurt business and people. Then, as if coming in for the TKO, Gallup finds my state’s residents as the most dissatisfied nationally with their states air quality. Wow, you can’t make this stuff up.

There definitely will be a next scene in this creature flick. Will the complaining folks of Utah act quickly to give up their SUVs for Toyota Prius and install solar panels? Or, will the Governor try to find middle ground? Or, will the Chamber just rewrite the brochure? Stay tuned to our next episode of, “As the Air Inversion Turns.”

Green PR, Corporate Social Responsibility, Sustainability, EPA, Pollution–we hear a lot about them. A tug of war it seems between competing interests. Users on one side, suppliers on the other. Get vs. give. Most answers coming slowly and with frustration on both sides. Where’s the balance?

In Part I below I raised my concerns about new EPA punitive plans for squashing polluting coal plants in favor of cleaner alternatives. Since posting this, two pieces of related rational thinking caught my eye.

First, at his 3rd annual energy summit, Utah Governor Gary Herbert indicated Obama’s new plan to cut pollution discharged by America’s power plants will likely raise electricity rates for consumers and cost the state jobs. Miami Herald put forth an insightful narrative around the recoil response of just one state that thinks the EPA is shortsighted at best.

“There is concern out there in the business community that this could have a detrimental effect on the economy,” Herbert said.

Second, Fox News published hard-hitting criticism of the president’s plan by comparing it to failed Germany energy plans and policies over the past decade. Senator Dan Coates, former ambassador to Germany, states, “If those goals look impossible, that’s because they are. Germany’s ongoing subsidization of alternative energy industries means Germans pay energy prices at least two to four times higher than the global average.”

Coates further states that 6.9 million German families are now classified in “energy poverty.” This is defined as energy bills exceeding 10 percent of income. Here’s the crazy twist to Germany’s full circle story. After thumping their chests to the world that they would abandon coal and nuclear, they have now backtracked,  importing French nuclear power and garnering 45 percent of the country’s electricity from coal. Hmmmm. Utah get’s 80 percent of power from cheap coal and is squarely in the target reticle for the EPA’s punishing new standard.

With that said, Utah has a rising child asthma rate (29% rise in nine years) and has among the nation’s highest rates of autism. New research shows a connection between autism and pollution. To think we can take our time fixing our rapidly growing pollution problems here and elsewhere is like unto the proverbial ostrich with its head in the sand. This should greatly concern us all. I already filter my in-home air and water. Tourists and potential residents will increasingly filter out potential destinations based on health, crime, and jobs–quality of life issues.  Let’s work harder on short- and long-term solutions.

Here in my home state of Utah, we have a problem. Air pollution growing as does the rapid rise in population, autos clog the freeway, and power consumption spirals up. Enter the mighty EPA to force our hand and Utah’s little secret smokestack is pressed again to the headlines. Annie Knox with the Associated Press today reports, “A federal (EPA) plan to cut pollution blamed for global warming by 2030 is winning cheers from environmental advocates, but a key state official says the plan is “… aggressive” and questions whether it can be executed.

The rule would curb national carbon dioxide emissions from power plants by almost a third over the next decade and a half. It would require Utah, which relies on coal for 80 percent of its electricity, to cut coal-generated emissions by nearly as much.”

The cheers from the green gallery are offset by folks that really understand the forced measures and cost of such upon a state flush with coal. Green advocates might argue Utah is also flush with sunshine. We can agree on this. And, in a free market, entrepreneurs like Josh Case of Energy Capital Group are moving toward solutions with the largest solar project in state history. Companies like Vivint Solar and Progressive Power Solutions step up to meet market demand for distributed solar. Rising costs for fossil fuel and the free market power growing demand for alternatives, independent of the heavy hand of the EPA. Yes, there are government incentives involved, not bull whip punitive penalties.

I sure like the the free market and entrepreneurs that create solutions to pressing problems. I am also convinced Utah must move faster towards sustainable solutions to declining air quality, before the free market punishes us via decreased tourism and negative public relations spawned by rising asthma rates and inversions that dwarf L.A.’s smog blanket. No one wants to ski on  yellow snow. Even now, I can here the Chamber massaging the message, “once you drive above the inversion cloud the air is wonderful.” ‘Weak sauce,’ don’t you think?

So, it may take a heavy hand to wake up a population fixed on huge SUV’s, single occupant cars, semi-effective public transportation, and eight cent/kW hour electricity. Have incentives had their day in the Sun? Pain is a great motivator and someone is going to feel it with the new EPA guidelines. What do you think?