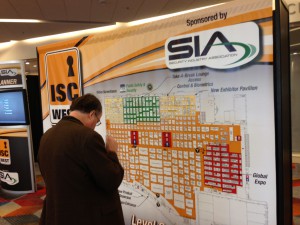 This week I joined 25,000+  security fans at the International Security Conference  in Las Vegas (ISC West). 1,000 exhibitors fought for attention with amazing marketing and PR dexterity.

I’ve been on the road doing event PR(public relations) for many entrepreneurial start-ups and some “big dawg” companies. Spreading the news about cool new technologies, new services, and basically awesome stuff! When with Novell, I accompanied some visionary executives including Eric Schmidt (of Google fame) and Chris Stone. On 9/11, I was standing next the new Novell CEO, Jack Messman, in Atlanta, GA at Networld + Interop when news came through of the first plane hitting the twin towers.  That was a tough and tragic week for PR. Years later, as owner of PilmerPR, I was in the office of Wall Street Journal tech mogul reporter Walt Mossberg as he became a believer in my client Josh Coates and a new startup called Mozy.  I was in the room with Novell execs hammering out a press release and a deal with IBM Websphere that moved Novell’s stock $900M that day.

Not all the work is bristling with coolness. But, this week is pretty good.  One client I represent at ISC West is Fire Avert. Imagine putting a little fireman in your kitchen smoke detector. The number one cause of home fires is in the kitchen, started primarily by unattended cooking. These fires amount to hundreds of millions of dollars in damages and claims, and unfortunately thousands of lives lost or injured. Fire Avert senses when the smoke alarm activates and turns off the stove, after it gives you time to stop the alarm if you are in the other room when your food started smoking. VIDEO

Utah Fire Marshals are very excited about this game changing technology. The experts say a working smoke alarm reduces the risk of death by around 50%. Can you imagine what good we could do if those pesky kitchen fires never started because of Fire Avert?

The second client here at ISC West (International Security Conference) in Las Vegas is SpotterRF. Further down the 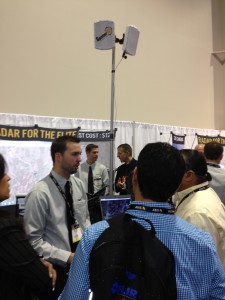 road than Fire Avert, SpotterRF was past startup to profitability in less than two years. The Department of Defense recently made a public announcement with SpotterRF. So did the Maryland DOT. SpotterRF’s compact surveillance radar is making waves with not only the US Navy, but with commercial Strategic Integrators like SAIC. 30 integrators have signed up to represent SpotterRF in North & South America, EMEA, and Asia. Today’s announcement showcases the value of affordable $12k wide-area surveillance radar for a luxury estate.  Protecting the perimeter (VIDEO) for elite warfighters, bridges, dams, borders, or private airports, SpotterRF radar has found several niche applications. 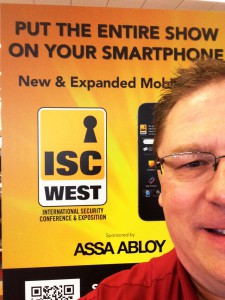 ISC has an app for that

Courtesy of Reed Exhibitions, ISC West did a great job of leveraging social media, online Flash maps, GPS, smart phone apps, and a little “growth hacking” to make the best use of time and space for an estimated 25,000 attendees. Even with the larger National Association of Broadcasters (NAB) conference across town and a taxi strike, I was able to get a taxi/limo fairly fast.