In the news again with great Public Relations –Provo/Orem #1. Pitney Bowes analyzed 384 metropolitan areas and the Provo-Orem area ranks first on a list of the nation’s fastest-growing metropolitan areas and will remain that way for the next five years. 2012 to 2017 Provo-Orem’s population is projected to add nearly 11,000 new households, or 7.4 percent at an annual rate of 1.5 percent.

This is not the first, nor will it be the last time Utah attracts accolades for top performance. Earlier this year the Wall Street Journal joined the cheering section for this region.  From “best place to live and do business” to “best managed” the applause keeps rolling in, while many states still struggle with massive debt, job losses, and stagnant growth.

All great news for us, right? Well, maybe.

The Utah I-15 Core Project construction wraps up this year at the “fastest completed billion-dollar, public highway project in the U.S.” Yay us, right? Well, maybe. Gary McGinn, Provo community development director states publicly his concern that we “accommodate that growth while preserving the characteristics of what makes Provo such a desirable place to live.” This writer and Green PR firm shares this concern. As I hike to and stand on top of Mt. Baldy above my Utah Valley home, I am in awe of the amazing vista before me in the valley. I tell my former Texas neighbors that “I live in a postcard.” What I don’t tell them is that air pollution is increasingly obstructing my valley view as we fill the 12 lane I-15 thoroughfare with single occupant SUVs at rush hour.

The EPA, American Lung Association, Healthy Utah, and thousands of parents concerned with rising rates of asthma in the state are now paying close attention while sounding the warning.

No one is more pro-business than me. No one is more keen on limiting the role of government in our lives. However, the future of Utah’s economy depends on maintaining white, not yellow snow at the ski resorts; beautiful smog-free vistas; air that you cannot taste in January. And, stop blaming the winter inversion, will ya’? 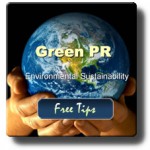 Front Runner and Trax are great starts. Planned communities with easy mass transit access are on the drawing board.  Terrific! Much more can be, no, must be done (ie. more CNG) to get ahead of the smoke signals starting to warn visitors and would be business tenants.

Idea of the day:  I would love to see Utah buck the EPA regulatory quagmire by granting state emissions & inspections approval to private CNG conversion kits previously killed at the state level because of the fear of EPA retribution.  Dual fuel vehicle owners, hybrids like the popular Toyota Prius, should get more tax breaks.