EPA Public Relations Mine Spill Nightmare – Can They Restore the Faith? 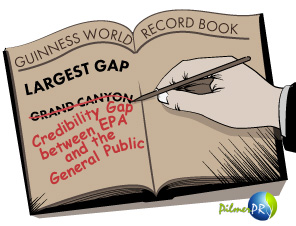 The EPA’s three million gallon mine spill in Colorado is a Public Relations and Crisis Communications nightmare on steroids! Five states, Mexico, river residents, recreation seekers, Native Americans and environmentalists are not writing thank you notes, but are dusting off their lawyers for a decade of repercussions that will likely rival the 1989 Exxon Valdez oil spill in Alaska. If wildlife could write, they would be firing off blazing letters to their congressmen. I share their collective disgust and frustration. Who do you call when the watchdog perpetrates the crime? 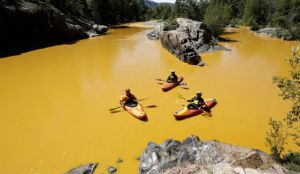 Now, I got that off my chest, let’s talk PR. Transparency, honesty, and daily communications with stakeholders is the only thing that will save the EPA’s leadership from the noose of public opinion. They started this week at less than zero and have to crawl out of the hundreds of miles of newly polluted rivers (with an S) to avoid drowning in the heavy metal laden sewage they created. Broken processes likely led to this disaster. A rewrite of procedures and much bowing low are required ahead of any press release promises.

To start the betting on how EPA fares, they said one million gallons was spilled. That spilled over to three. To quickly address environmentalists, they immersed 10 trout fingerlings in the sludge for the weekend. After nine of ten survived, they reported wildlife won’t likely be harmed. Wow! That’s a relief. Yo, EPA! You dig your grave deeper with that kind of shallow public relations. The Navajo Nation accuses EPA personnel of trying to get down river residents to quickly sign a form to cap claims for damages from the spill. This was described as “…grasping for legal cover before the full extent of damage is known to Navajo farmers.”  Hey, EPA! May I suggest that your attorney’s didn’t major in PR!

At a press conference, EPA administrator Gina McCarthy labeled the spill “heartbreaking,” pledging to work with tribal officials to get control of the spill. “We want everything to be transparent,” she said. May I remind the EPA that words have to match actions. Didn’t we learn something from the 2010 British Petroleum (BP) gulf oil spill? In that case, the “green” message from BP painted a planet hugging company image, while actual maintenance neglect resulted in more than $44 billion in damage and cleanup. 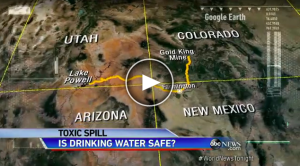 NBC is gracious when calling this fiasco a “black eye” for the EPA. This event is the gift that will just keep on giving for years to come. What happens when this stuff gets to the ocean in Baja California? Perhaps the water won’t be a jaundice yellow by that point, but I’m guessing Mexico is not laughing this off. Shucks! I’m just a lil’ ole’ taxpayer and I’m not laughing. No big corporate bad guy to shield us from the the cleanup or the bill.

PilmerPR‘s first public relations rule of Corporate Social Responsibility (CSR) is: First Be Good, Then Talk About It When It Makes Sense. Has your opinion of EPA “good” been lowered?

The EPA is so used to pointing fingers. It will be interesting to see how they reconcile the government bureaucratic run for legal cover reflex with the need to do the stellar job required to restore the public faith. Will EPA fire anyone over this? Inadequate procedures or negligence is a probable cause. What question would you want answered at this point by the EPA?