Hats and Helmets off to Y Mountain / BYU

Y Mountain and Brigham Young University (BYU) first came into my view as a new missionary riding a bus into Utah Valley  in 1980. The giant letter, taller than a football field length, seemed a homecoming beacon leading me closer to that day’s destiny  – the MTC. The immaculate BYU campus unfolded before me that day and left an indelible impression.

The Y next entered my life as a missionary in Wyoming while riding with a mission leader to our overnight stay at his rural ranch house. The elder statesman rancher insisted on listening to the ending of the 1980 Holiday Bowl on the radio. A former high school football lineman in Mississippi, who was I to argue? As the incredible ending of the Miracle Bowl unfolded, I was hooked as a Cougar fan. Who listening was not affected that evening as Jim McMahon sent the famous last second “hail Mary” pass to the end zone for the victory? Afterwards, my companion wasn’t too thrilled with my silent prayer late in the game promising our work on “preparation day” if the Cougars pulled off the win.

The Y came back into view as I neared the end of my mission as a zone leader covering northern Salt Lake Valley, the U 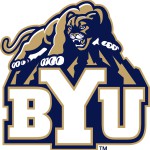 of U, and Temple Square. While reading a Church News article about the nation leading BYU Marriott School of Management, I felt impressed that I should attend college there. So, I began making plans for after my mission.

After my mission and as the summer waned in 1982, the Y came into view again.  I entered Provo a week prior to starting class as a new student Cougar. That week, one of my returned missionary roommates introduced me to his sister and fellow Cougar, Diane. We wed in 1983 as we struggled together towards our BYU degrees. We developed deep roots and warm memories.  We left a piece of our hearts in Provo after graduation from the school. We entered BYU to learn. Now, we went forth to serve.

Years later the pull of Utah Valley brought us back, complete with children who knew the Cougar fight song.  In their youth, we dyed them in BYU blue, regaling them with tales of my 1983 finance class with Steve Young and the 1984 national championship, the year we both graduated. They even heard how finance professor Clark had our class do a Net Present Value (NPV) analysis of Steve’s record setting $40M contract with the LA Express, signed that same semester. NPV $5.2M as I remember, and Steve later said his agent saw more of that money than he ever did from the short-lived USFL team.

Now, as of this summer all these years later our family will have amassed a combined total of six BYU degrees with two of our children attending the Y (two from BYU-I).

Over the years, our season football tickets have covered all four sides of Cougar (now LaVell Edwards) Stadium. This includes the end zone seating that I helped to install in 1982 as a student worker on the stadium expansion.

As the owner of a PR firm in Utah Valley, I have had the rare privilege of mentoring dozens of BYU interns as they seek to grow their public relations careers. This mentoring opportunity has enriched my life greatly as has my volunteer work with BYU PRSSA and Marriott School Center for Entrepreneurship. If I ever have the privilege of meeting Karl Maeser, the self-sacrificing visionary of BYU predecessor, Brigham Young Academy, I hope to  report that I did indeed hold the torch of the Y high above the mountains as a beacon for fellow travelers.

By John Pilmer, CEO of PilmerPR, LLC . BYU Class of 84