Wouldn’t it be fun to do the public relations (PR) for Ezekiel “Ziggy” Ansah, the Detroit Lions 1st round NFL draft pick. The new football version of the Ziggy brand is a rising star story made for Hollywood, ala The Blind Side. Never playing American football until about three years ago, this lion traveled an unlikely trail from Africa to Provo, Utah where he became a “defensive dominator.”

As the 5th pick in the 1st round, the Ziggy brand is sure to “Rise UP”! That marketing fact is not lost to BYU’s PR machine. They brought graduation to him for the draft event,  where he donned cap and gown.  His football mentor/coach, growing BYU legend Bronco Mendenhall, was close by for the kick off of Ziggy mania. This liquid fast public relations mania, in my humble PR pro opinion, is just getting started for the newest famous Mormon.

Marketing pro’s may remember that Ziggy, Detroit’s new African Lion, is not the first to build the Ziggy brand. For 10 years, my wife and I on Valentine’s Day, Easter etc. 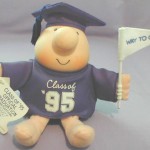 traded cute little stuffed Ziggy cupids, bunnies and other “awww” gifts. Courtesy of the late Tom Wilson, Jr., this round-nosed cartoon character carried the brand to a pinnacle of cuteness.

For those of us old enough to care, there was at least one other star sporting the Ziggy brand. David Bowie, the flashy icon of glam-rock in the 70’s, created the Ziggy Stardust alter ego.

What does the future hold for the Ziggy Ansah brand? As Yoda once said, “Future, difficult to see.” Ziggy could be an NFL novelty flash in the pan. He could get rich and self destruct, like Ziggy Stardust in the song.  Here’s my prediction: Ziggy Ansah will do well in the NFL, maybe not the Lyle Alzado of his day, barring injury, but he will do well. He is already a fabulous ambassador for Brigham Young University and the Church of Jesus Christ (Mormons) and will continue to be regardless of football success and future fame.  His well-grounded humility is bone deep. It will continue and I hope he surrounds himself with savvy folks that really “have his six.” Hollywood may yet make a Ziggy movie ala The Blind Side (Michael Oher). My last prediction is Ziggy will use his new found wealth to help the people of Ghana, Africa to rise. And, even if football fails him or he gets injured, Ziggy will rise in another setting because he has the heart of an African Lion.

The following graph shows a declining Ziggy brand in the news. However, look carefully at the end of the graph. There is a distinct uptick aligned with football season. This, in my opinion will move up and to the right over the next year. Agree?