In a recently released survey, Utah was listed as one of the friendliest states for small businesses. Since the survey began, back in 2012, Utah has been voted in the top by the state’s own business owners each year. The survey, performed by Thumbtack.com, in association with Ewing Marion Kauffman Foundation, gets their data straight from the horses’ mouth. They talk to the business owners themselves to get their rankings. 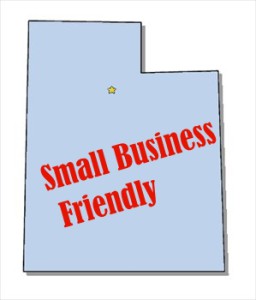 “Creating a business climate that is welcoming to small, dynamic businesses is more important than ever, but rarely does anyone ask small business owners themselves about what makes for a pro-entrepreneur environment,” says Jon Lieber, Chief Economist of Thumbtack. “Thousands of small business owners across the country told us that the keys to a pro-growth environment are ease of compliance with tax and regulatory systems and helpful training programs.”

As an entrepreneur myself, I have personally benefited from Utah’s entrepreneur-friendly culture. I attribute the state’s success with small businesses to tax incentives and regulation that help speed business growth. On top of that, the predominate faith heritage in the state promotes self-reliance as a way of life. This has contributed to such a great environment to own and grow a business.

With Utah being one of the top ranked states, it’s no surprise that Salt Lake City received an “A” grade rating, making it one of the top cities in the West for small businesses. With Utah’s entrepreneurship friendly attitude, it may not come as a shock that it is one of the fastest growing areas for new businesses, being nicknamed the “Silicon Slopes.”

Utah’s rich heritage of large tech companies like Word Perfect, Novell, Megahertz, Iomega, Omniture, Altiris and LANDESK spawned hundreds of new tech startups in the state over the past two decades. The state now sports some 5,000+ tech companies representing some 70,000 jobs. A fertile crop of highly skilled technologists left in their wake enjoy living and working here. Universities like BYU, the University of Utah, UVU, Weber State, and USU support this ecosystem with mature coursework and degrees targeting tech.

This explains the tech race on the Silicon Slopes, but accounts for less than 6 percent of total jobs. Other industries have had similar cycles that encourage similar entrepreneurial outcomes.

Check out the survey here and see what states and cities ranked high and which aren’t known for the business friendly attitude.

Need help establishing your startup’s marketing and getting your brand out there? We can help! Contact us for more information.