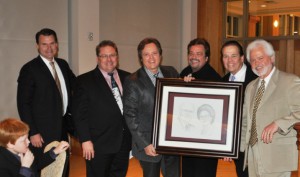 Public Relations campaigns, at least in this Utah PR firm’s experience, are usually measured in weeks or months. Even CSR PR (corporate social responsibility) campaign plans may forecast only a few years out. [youtube width=”212.5″ height=”172″]https://www.youtube.com/watch?v=Ti6lYRakQ04&feature=plcp[/youtube]

Imagine a media relations plan spanning more than five decades. Now think of the volatile entertainment business where one hit wonders abound.  It would be more rare than a photo of Jerry Lee Lewis, Carl Perkins, Elvis Presley and Johnny Cash singing together. Or, say this picture of Sammy Davis and Marilyn Monroe.  And, it would outlast all of them.

That’s the rarefied air the Osmond Family now finds themselves in. With spinoff businesses right and left, George and Olive Osmond happily sat in the publicity background while directing the businesses generated by the Osmond entertainment machine.  In preparation for the induction of parents George and Olive in the UVEF Hall of Fame November 2nd,  Jimmy Osmond shared some factoids with me about his parent’s business legacy.

Search #UVEF for Twitter comments during the Hall of Fame dinner.

Jimmy told me one of the secrets to his parents success was not caring “who got the credit.”