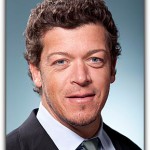 After the smoke cleared the room, the young entrepreneurial sharpshooters of LunchBox held the coveted UVEF Top Gun trophy in-hand.  Such was the “OK Corral” shootout atmosphere of the first annual “Todd’s Top Ten” crowd pitch event presented by UVEF.

In a room full of investors, entrepreneurs, and over a hundred fans, this fast-paced power pitching event matched wits among champion student startup companies.  Each had already won in previous Utah Valley student business competition. Prior to the event, Todd’s event preparation led him to single out H2O Tech, Invironment, and PanX for especial focused feedback and praise. However, Todd told me after the event that he was impressed with the overall quality and solid business ideas of all presenters packed into the 90 minute competition.

Todd’s pre-event research included studying each company’s 2-page business summary. Then, the seasoned leader offered solid, direct and sometimes edgy advice to help the startups succeed. Maybe not Shark Tank, but Todd’s razor focus and Fortune 500 thinking cut through to the meat of the matter, providing hugely targeted feedback for presenters. Comments centered around market size, idea protection, and business execution. Todd noted that H2Otech’s 4-minute presentation and slide show was the most complete, precise, with most of the bases for success covered.

Although not a frontrunner in Todd’s comments, LunchBox presenters took the other presenters to social media school, leveraging Internet crowd voting, open to any posse the young guns could pull together using social marketing techniques. Voting was open for just over an hour during the event.  Presenters were told days prior that they could spread the word to marshal their fans to the one-hour vote. Early votes were zeroed out at high noon, so each company received votes from in-room attendees, as well as their social fans online.  What some called “gaming the system,” others called savvy social marketing. Note that LunchBox’s business model depends on their success as social marketers to college students.  I say “congrats” for reading the teacher’s note that spurred their best effort in garnering over 1000 votes from across the Internet.

STAY TUNED: I am working with Provo City Ch 17 TV to produce a television feature from today’s event. WATCH www.UVEF.net for more to come.

FiberFix manufactures and sells a newly developed repair wrap inspired by the casting tape physicians uses to repair broken bones. We discovered casting tape could be modified to make an incredibly strong and durable solution for common household and industrial repairs.

Unattended cooking is the #1 source of residential fires, injuring or killing 5,000 people yearly in the U.S.  Fire Avert developed and sells an emergency shutoff for electric stoves and ovens that is triggered by the sound of a smoke detector.  It is Z-wave programmable for home automation integration.

Because of increased government regulations related to underground fuel storage the depth and number of inspections has increased dramatically.  The FuelOperator Inspection App builds a set of inspection questions specifically relevant to each store based on its own state and county regulations. FuelOperator warehouses the data collected by each inspection for submission to the appropriate governing agency.

H2O Tech has developed a patented dental drill technology that uses high pressure high pressure water to remove decay from teeth.  This technology uses about a tablespoon of water and creates no friction, vibration, heat, or NOISE and thus eliminates the causes of pain in dentistry.

Inviroment has created a patent-pending technology that is an environmentally safe, chemical solution that starts decomposing plastics in a matter of months resulting in a 13-20% increase landfill capacity and accelerated methane output as plastics decompose, leading to increased green energy harvest.

“Lunch Box” is an app/website that shows current college students every event on campus that is providing free food.  Whether it is a club meeting, service project, or even a department opening social, if there is free food then students will be made aware of the event.

Nulingu is a platform that helps people practice or learns new languages through interaction with real native speakers through a one-on-one real-time video chat that provides instant feedback.  The Nulingu platform will improve conversation skills and pronunciation as well as connect people around the world.

Produces a baby monitor that tracts the vital signs of infants through a non-invasive sensor to prevent infant mortality due to medical problems related to SIDS.  This technology can be adapted for use with seniors experiencing ager related medical problems as well.

PanX uses patented RF or Radio Frequency technology to create a “panic button” and location sensor for hotel workers and guests.  The technology also has wide application in locations sensing in the broader GPS market space.